Amazon has been frustrating during the pandemic, but Prime is more popular than ever 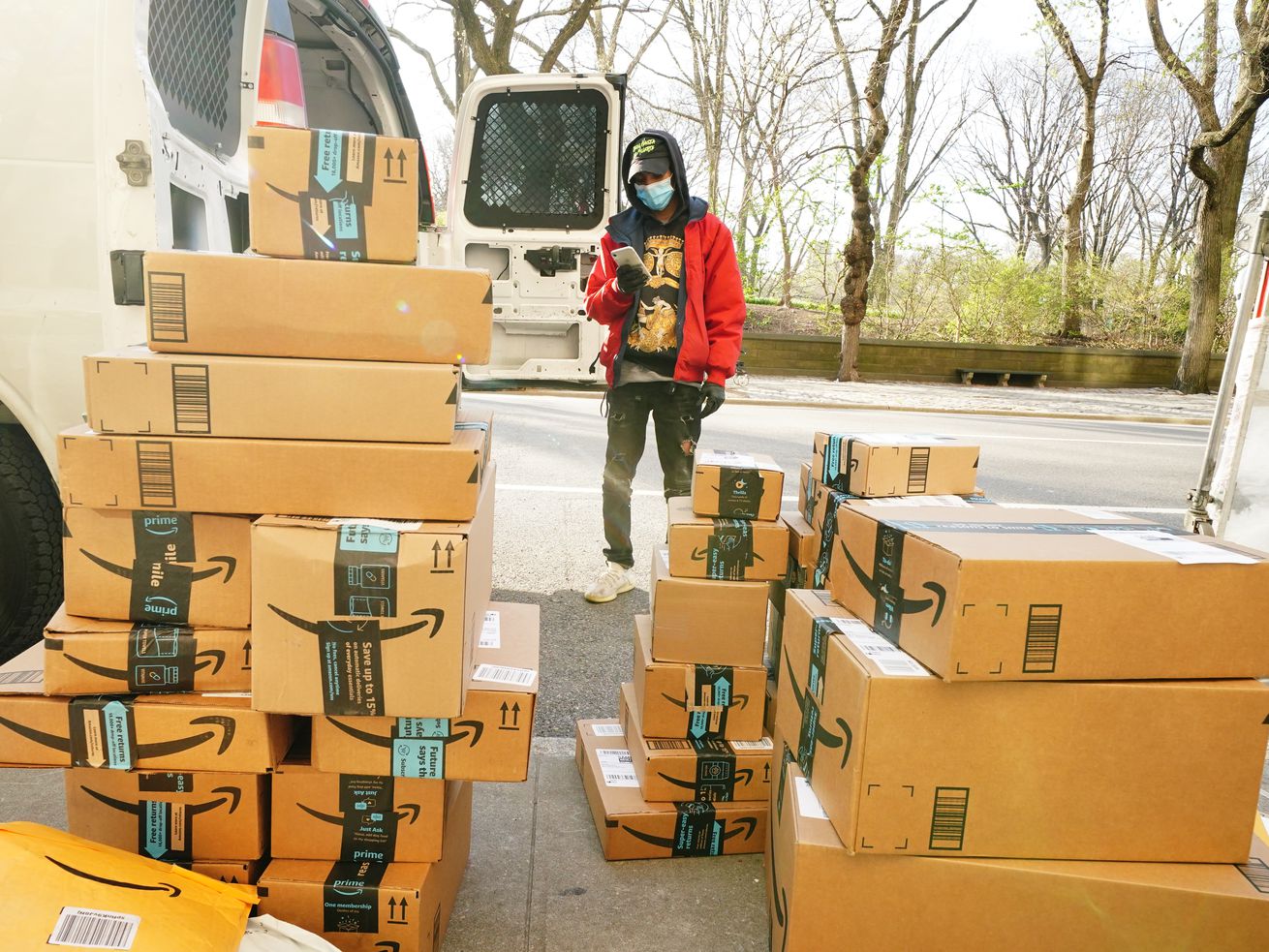 A delivery person stands before a pile of Amazon packages during the coronavirus pandemic on April 7. | John Nacion/NurPhoto via Getty Images

“Ordinarily I would NEVER use Amazon,” the El Cerrito, California, resident wrote to Recode in an email. “I hate giving that kind of octopus company my $$ and my valuable personal information.”

But the coronavirus pandemic, which has killed more than 45,000 people in the US and prompted widespread stay-at-home orders, changed all that. Last month, Kallan gave in and signed up for the company’s Prime membership program.

“I’m 70, got [a] couple of health issues that make me terribly vulnerable to the virus,” she said to explain her decision. “I thought I’d never have a reason to join. Sadly, it’s all different now.”

Kallan is one of around 100 readers who responded to a Recode survey about what’s changed in their Amazon shopping experience since the pandemic started. Dozens of them reported that practical challenges have turned the company’s usually reliable service into a frustrating and uncertain process, with delayed shipping dates, limited supplies and services, and confusion as nonessential items like Harry Potter books are delivered sooner than essential ones like toilet paper. Others expressed serious reservations about the company’s business and labor practices. While Kallan says she plans to eventually cancel her membership, most survey respondents say they aren’t going anywhere: Amazon is still their best option — and as Recode has previously reported, that’s probably going to be the case whenever the pandemic ends.

“[U]nfortunately, nothing beats Amazon’s range of products and quick delivery,” Sarah Durham, a 41-year-old Prime member from Plano, Texas, told Recode in a survey response. “Regardless of how I feel about them as a company, I rely too much on their service.”

Responses to Recode’s survey also correspond with new data from two external research firms that shows that Amazon Prime membership sales rose significantly as the coronavirus pandemic spread. Sales of Amazon Prime memberships in the US increased 10 percent year over year for the weeks of March 16 and March 23, according to estimates from the research firm Second Measure, as the virus began to force shutdowns in big metro areas around the country. Those weekly Prime membership increases are the largest for Amazon since early November, a time of year in which the company typically sees a holiday season bump in signups.

At the same time, results from a Consumer Intelligence Research Partners (CIRP) survey show that the rate at which Amazon shoppers converted from a free Amazon Prime trial into a paid Prime member in the first quarter of 2020 was the highest it’s been in two years.

“Prime members do get the quickest shipping … and in times when consumers are concerned about getting the supplies they need, knowing that their order is going through the most efficient shipping channel is probably appealing,” said Josh Lowitz of CIRP.

An Amazon spokesperson would not directly comment on the data from the research firms, but highlighted in a statement that Prime offers many perks beyond fast shipping, such as unlimited streaming of thousands of movies and TV shows.

It’s not surprising that the Amazon shopping experience — and its normal one- and two-day Prime shipping promises — have bent under the weight of pandemic-induced shopping demand. Even retailers with decades more experience like Walmart and Target have had serious trouble keeping high-demand products in stock and are warning customers about significant delays. Lockdowns have shuttered many of Amazon’s brick-and-mortar competitors that sell nonessential items like apparel, and many consumers would rather order essential items like cleaning supplies and canned food from home rather than visit grocery stores that remain open. The company didn’t have much time to prepare for this sky-high demand, and meanwhile, Amazon’s warehouse network has also been disrupted by high rates of absence and new safety measures that can decrease efficiency.

Other types of problems have arisen as Amazon has prioritized shipment of its most in-demand items. For several days in late March, Amazon hid faster delivery options on some nonessential items sold by its own sellers in what the company told Recode was an “unintended” error after I pointed out the issue. That meant Amazon was featuring product listings for certain items in its warehouses that had far-off delivery dates even when marketplace sellers were offering the same products at the same price with earlier delivery promises. In the week that followed the fix, sellers told Recode that Amazon was now displaying artificially late delivery dates for items sellers were shipping themselves, which was scaring off some shoppers. After Recode alerted Amazon, the company called it an “error” and said it fixed the issue.

These errors not only made it more confusing to shop on Amazon, but they also harmed some marketplace sellers who had overhauled their operations to ship items from their own facilities while their inventory in Amazon warehouses wasn’t getting shipped out because the items were deemed nonessential.

“That was catastrophic for five days,” said Matt Altschul, CEO of Smartish, a maker of cellphone cases and other accessories. Smartish’s weekly sales on Amazon were down 50 percent in mid-April from the average weekly total in the eight weeks leading up to mid-March. “Nobody was buying the products. Conversion rates dropped in half.”

Today, Amazon accounts for nearly 40 percent of all US e-commerce sales, and the Prime program is perhaps the biggest reason why. Prime members shop more frequently and spend more annually than non-Prime members do, and they often price-compare across other websites less. Jeff Bezos said in January that Amazon has more than 150 million paying Prime members worldwide, and CIRP estimates there are now 118 million Prime members in the US alone, where most customers pay $119 a year for an annual membership or $12.99 a month.

Yet, the most utilized perk that comes with Prime — two-day and one-day shipping on tens of millions of products for no extra fee — hasn’t been offered for many Amazon products during the pandemic.

For 35-year-old Steve Sanchez of Fresno, California, these shipping delays and other frustrations negated his reason for paying for a Prime membership, so he canceled.

“I understand the Covid-19 pandemic is causing the delays, but for Amazon to still charge full price for their Prime service is ridiculous,” he wrote in a message to Recode. “I am surprised they didn’t waive the monthly fee. It would have been a good PR move on their part. All over Twitter I see people posting about the Prime delays. I’m not the only one who is unhappy.”

But Sanchez seems to be in the minority of Prime members who cancel the service, according to Recode’s survey.

Tiffany Lopinsky, a 26-year-old from Boston, Massachusetts, said Amazon and Prime shipping has still been the best option for ordering online during the pandemic.

“I already shop for 95% of my stuff online, but Amazon has been the most reliable of any retailer I’ve ordered from during the coronavirus outbreak,” she told Recode in a survey response. “I’ve had Target, Walmart, and Chewy online orders canceled or significantly delayed. Amazon has met or exceeded their shipping timeline on every order I’ve placed. Other retailers have overpromised on shipping in order to capture my order, then underdelivered, which I find manipulative and frustrating!”

Lee Hwang, a 52-year-old resident of Berkeley, California, has encountered a host of confusion on Amazon over the past month, but still doesn’t see herself “canceling my Prime membership immediately.”

This confusion has prompted Hwang to shop more on Etsy and eBay during the crisis “because availability and pricing at Amazon is so variable and because I wonder about the safety of the company’s warehouse workers.”

Some other survey respondents echoed Hwang’s behavior shift; they are sticking with Prime but also shopping from other shopping sites that they wouldn’t have before, to fill in the gaps. If that behavior becomes widespread, it is possible that some other e-commerce sites besides Amazon will also benefit as more overall shopping transfers to digital storefronts.

But if the shipping delays and other issues connected to the pandemic can’t knock most people off of the Prime bandwagon, it’s hard to imagine something that will.

Open Sourced is made possible by Omidyar Network. All Open Sourced content is editorially independent and produced by our journalists.